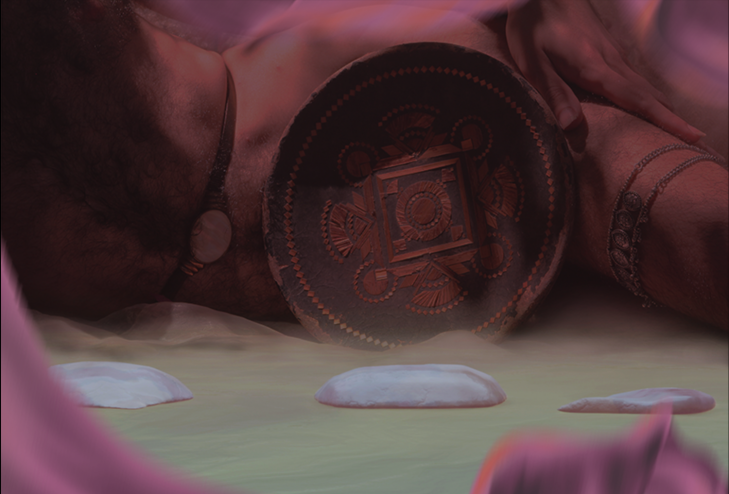 According to greek mythology the Three Graces were the goddesses of charm, beauty, nature, human creativity, goodwill, and fertility. Together they are also known as the Charites. The Charites‘ major mythological role was to attend the other Olympians, particularly during feasts and dances. They attended Aphrodite by bathing and anointing her in Paphos, Cyprus (which is considered to be her birthplace) before her seduction of Ankhises and after she left Olympus when her affair with Ares came to light.

“disarmed by three giant rosy pebbles” is an homage to a queer and contemporary version of the three Charites with them being personified by: Zak Kostopoulos/ Zackie Oh!, Paola Revenioti and Dimitr@ Kalogiannis. Each dress is dedicated to each of these contemporary Graces, with individual inspired imagery and references to their own quotes. The project is especially honouring the memory of Zak Kostopoulos, a queer activist and human rights defender in Greece, who died on 21 September 2018 following a violent attack. Zak, also known by his drag stage name Zackie Oh!, was a defender of the rights of LGBTQ people and HIV-positive persons. It has been more than two years that Zak was murdered, but his death still has not been brought to justice. The criminal investigation resulted in charging two civilians and four police officers with deadly bodily harm. Many are concerned with the apathy of the authorities in Zak’s case, and the persistent systemic failings in investigations concerning cases of police violence in Greece. Informally renamed Zackie Oh after Kostopoulos’s drag queen persona, the pedestrian side street where he was murdered is now a symbol of the fight for justice in a case that has not only exposed profound homophobia in Greece but a culture of “abuse and impunity” in its police force. #Justice4ZakZackie

In addition to that, the project is also dedicated to the presence and LGBTQ pioneer figure Paola Revenioti, a Greek trans woman, filmmaker, publisher, artist and activist of the Greek LGBTQ movement. From a young age and due to the social exclusion of trans people from any job, she made a living as a sex worker. Her contribution to the rights of queer people in Greece is considered tremendous and she is often mentioned as a legend of Athenian trans culture. She published the magazine “Kraximo” from 1982 to 1993, featuring articles on international and domestic political and social movements giving a voice to the demands of homosexual citizens through interviews alongside artistic photographs of naked men, which made their mark yet were accompanied by arrests and trials. In 2014 she released a documentary film entitled “Kaliarnta” – a glossary / secret language of and for the homosexuals & transvestites of the 60’s in Greece. @revenioti

Dimitra/is Kalogiannis, lives her life in Skala Skamnias, a conservative Greek fishing village in Lesvos where she was born. She nursed her dying parents and now lives alone, able, at last to enjoy her femininity. Misunderstood by family but celebrated by journalists covering the refugee crisis in Lesvos, her will for life and resilience is trully captivating. Gently observed and interviewed by Tzeli Hadjidimitriou , a greek Lesbian filmmaker similarly aware of what it means to grow up different in a narrow minded patriarchic community, their shared humanity and mutual respect shine through a biographical film that can be found on YouTube with the title: “Mr.Dimitris and Mrs. Dimitroula”.

“The way I always envisioned mythological creatures and particularly the Graces has been as genderless figures. Undefined entities that could be anyone who is brave enough to celebrate the beauty that they refract within. These three personalities from the queer community in Greece, embody the absolute meaning of refracting beauty, grace and kindness.”

Charitisia was the feast celebrating the Graces where competitions of music, dance, art and poetry took place. In this context, this collaborative video work brings different art practices together. The video directed by Marios Pavlou is a celebration of the Charites channeled through the performance art of Garose, a multimedia artist and a contemporary pioneer in the queer community of Cyprus, with music and sound design by Kassiani Goulakou and 3D art by Nathan Schönewolf.