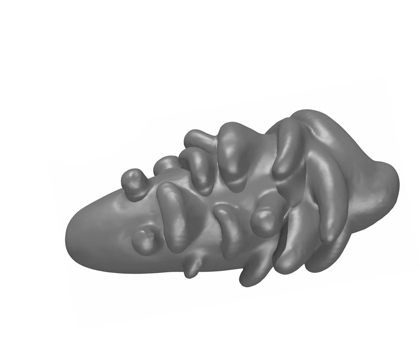 Thomas Musehold is a sculptor and develops among others small-scale objects out of casted and modified foundries. Often those artefacts remind of nature forms, which visually establish as stylized, varnished and highly aestheticized sculptures – shaping and materiality do not appear in any natural relation. Rather, the conformity of their surface eludes 3D-prints or computer simulations. Mirror tables, underlining the objects in their cool appearance, open a virtual space into the depth and become simultaneously an almost scientific support for their investigation from all sides.

The artist plays with different levels of interpretation, which is not focused any longer just on the visual language of sculpture and its spatial staging. With the use of scientific initial descriptions, normally written by biologists while researching new plant species, the reception of the artefacts through the medium text is guided again in a scientific direction.
The recitation of the texts by children and teenagers, who seem to appear from nowhere during the opening, transports relevant content information in advanced trade language physically and vocally into the exhibition space. The scientific texts are based with their binding vocabulary on a Intelligibility within their discipline, whereby not only the ambiguity of the described objects, but especially the artificiality
of the whole situation creates the irritating moment. While the association of the shapes and the real nature of the exhibits not seem to complement each other as expected, the connection oft the spoken and the speaker appear completely absurd, too. Trained by the artist and the theatre teacher Tanja Grix the speech neither with it’s content nor with it’s (body)language is consequence of a natural reaction or an adequate knowledge and linguistic usage of the young people, but is the result of a rehearsed theatrical production.

Thoughts on the essence of things, the "power of the word", the parameters of art and the artificial, the subjectivity of perception, but also the transformative potential of media, reception and interpretation etc. come into mind with this multidisciplinary
cooperation.