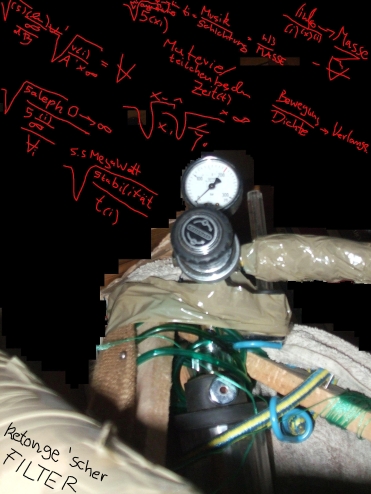 Sound as an active ingredient for ketong sculpture has been an expression of electro-acoustic and visual form since 1989. Due to the lack of resources, the imagination of trash materials such as cardboard and old wood as well as bulky waste electronics create a realization in order to meet the chaos - indeed to give the day-to-day challenge of an autistic perception a limit as mental security. The number as an ordering element can be overlooked as an invisible indicator of an informal - organic nature.
In the exhibition in the underground car park in Cologne, the sound artist will show a self-made trash loudspeaker, which consists of a heating exhaust pipe and a non-functional pressure gauge for oxygen (souerstoff) and serves as an open process of a performance with friends and colleagues.
The informal flood of materiality is formed there by the limitation of an intuitive mathematics and narrowed to strict conception.
(Ketonge)

Ketonge studied art, music and psychology at the Academy of Fine Arts in Düsseldorf, the Kunsthochschule for Media Cologne, the Cologne University of Music and Dance, as well as at the Universities of Cologne and Siegen, and graduated with diplomas, masterclasses and certificates in the years 2005/2006.

He was and is a member of several ensembles for experimental music, among others. with Fantasmophonika with Simon Rummel and the singing landscape painters with Oxana Omelchuk and Constantin Herzog. In 2000, he was awarded the second prize at the 6th International Music Competition for Young Culture in Düsseldorf, with the Ensemble Die Kugel with Dorothee Haddenbruch, Ligia Liberatori, Josef Rebbe, Simon Rummel and Juan María Solare, as well as other awards and nominations Fraunhofer Institute (networks) for his theoretical considerations on art and music in 2005.

Concerts and performances have been documented several times on radio and TV, such as the production radio unexpectedly with the composer and jazz pianist Simon Rummel on subjects of experimental art and music.